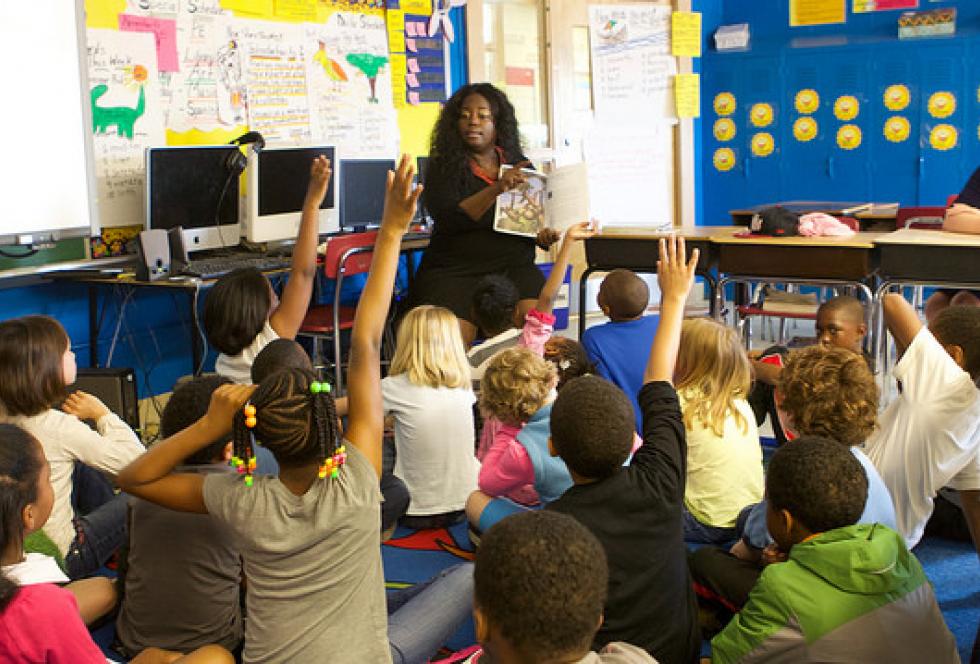 Decades of research have documented that students of color, particularly black children, are disproportionately classified by schools as having disabilities. In 2016, 12 percent of black children across the nation received services at school for disabilities ranging from emotional disturbances to physical disabilities to intellectual impairment. Only 8.5 percent of white children received those services.

The disability rate for Hispanic students — 9.4 percent nationally — is only slightly higher than for whites and the disparity hasn’t been as contentious as the disproportionality for blacks. Some academics and advocates have argued that disability status had become a tool to perpetuate racial segregation, especially in the South.

Beginning in 1997, a series of laws and regulations were put into place to monitor and fix how schools across the country put children of different races and ethnicities in special education. Most recently in 2016, the Obama administration revamped these rules to make them more uniform across states. But U.S. Education Secretary Betsy DeVos has delayed implementation. The matter is now tied up in the courts.

Against the backdrop of this civil rights debate, some quantitative researchers are arguing that the earlier research may have inadvertently misidentified the equity problem. Two new studies by independent groups of scholars find that students of color are actually less likely than similar white students to be identified as having disabilities and obtain special education services at schools.

“We have stronger evidence that there may be bias, but it’s running in the opposite direction than we thought,” said Paul Morgan, a professor of education at Pennsylvania State University.  “You’re more likely to be identified with a disability if you’re white and English speaking. That’s an inequity.”

Morgan said there’s a lot of “untreated need” among students of color.

Morgan has published a series of articles in partnership with George Farkas at the University of California, Irvine. He takes apart the raw numbers, which he agrees show that black students across the nation are identified as having disabilities at higher rates than white students. But he points out that black children are disproportionately poor and often grow up in communities without good access to healthcare, which can increase the risk of having a disability. These other factors could legitimately account for the higher disability rates and are not necessarily a result of teacher bias, he said. When Morgan compares children with the same family income, academic performance and other characteristics, he finds that children of color are less likely to receive special education services than similar white children.

Morgan likens the phenomena to asthma. Black children are more frequently diagnosed with asthma than white children but you probably wouldn’t accuse pediatricians of making racist diagnoses. Instead, you might reason that black children are more likely to live in poor housing and environmental conditions where they’re exposed to more allergens and those conditions are triggering the asthma.

In Morgan and Farkas’s newest study, “Are Schools in the U.S. South Using Special Education to Segregate Students by Race?” scheduled for publication in a forthcoming issue of the journal Exceptional Children, they and four co-authors focus on the South, where many observers have noted disproportionately high rates of black students in special education. Across 11 southern states (Alabama, Arkansas, Florida, Georgia, Louisiana, Mississippi, North Carolina, South Carolina, Tennessee, Texas and Virginia), black students are 44 percent more likely than white students to receive special education services, compared to 41 percent nationally. Depending on the disability and the school district, children with disabilities are sometimes taught in separate classrooms.  In other cases, they remain in general education classes and receive extra services, such as occupational therapy.

When Morgan and his colleagues considered factors other than race, they found that that black students, even in the South, were under-identified for special education services. Specifically, they calculated that southern black students had 45 percent lower odds of receiving special education services than white students who had similar family income, academic achievement and school characteristics. Even among students attending the same school, Morgan found that a black child, on average, was less likely than a similar white child to be identified as having a disability. (Morgan presented his research findings at a conference of the Society for Prevention Research in May 2019.)

This analytical approach has its drawbacks. We can’t objectively measure clinical needs in children and then check how well the schools spot disabilities. Instead researchers use proxies, such as poverty, because, statistically, poor children are more likely to be diagnosed as having disabilities. But poverty alone doesn’t explain disability rates. Even among kids who are equally poor, a black child is still more likely to be identified for a disability than a white child. And, obviously, disabilities can manifest in children of all income levels.

To arrive at their counterintuitive results, Morgan and Farkas compare kids of equal academic performance. Among children who post the same test scores, a white child is more likely to receive a disability diagnosis. Black students, on average, tend to post lower test scores. Because low-achieving students are more likely to get diagnosed with a disability, such as an intellectual impairment, the raw numbers for disabilities among black students are much higher than for white students.

One Morgan critic, Daniel Losen, director of the Center for Civil Rights Remedies, an initiative at the Civil Rights Project at the University of California, Los Angeles, says that the test scores themselves are the product of an uneven, racially biased playing field and shouldn’t be used to prove that disability rates are right or wrong. From Losen’s persective, Morgan is controlling for the racial bias that civil rights advocates want to highlight.

A more direct approach to discern if disability rates at school are racially biased was undertaken earlier this year by four researchers who combined Florida birth records with school records. They could see which kids were born prematurely or had a low birthweight and compare health records at birth with disability diagnoses at school. These researchers also found, just as Morgan and Farkas have, that both black and Hispanic students were less likely to be identified with disabilities than similar white students.

This birth records study, “School segregation and racial gaps in special education identification,” was circulated by the National Bureau of Economic Research (NBER) in May 2019. It hasn’t yet been published in a peer-reviewed journal, which means it could still be revised, but it was produced by four highly regarded quantitative researchers at Michigan State University, Northwestern University and American University.

The birth records study drilled down further to each school in Florida and discovered that getting diagnosed with a disability depends greatly on a child’s classmates. Black students were over-identified for disabilities in schools that are dominated by white students. By contrast, black students were substantially under-identified in schools that have high percentages of students of color. (They discovered a similar but less dramatic trend for Hispanic students.)

“Black and Hispanic students may ‘stand out’ in schools comprised of mostly white students, making their perceived disabilities more readily noticed,” the authors wrote in their paper.

“The ‘threshold’ disability level that triggers an identification may be substantially higher in heavily minority schools than in heavily white schools,” the authors added.

More than 40 percent of the nation’s black and Hispanic students attend racially isolated schools in which more than 90 percent of the students are students of color. And that helps explain why under identification of disabilities may be the bigger problem today.

Special education services are expensive, often more than double the cost of educating a child who doesn’t have a disability. Roughly 6.4 million public school students in the U.S. receive special education services annually, at an estimated cost of nearly $40 billion. The federal government foots only a small part of the bill, leaving localities and states to pay for the rest. It’s not surprising that white, well-resourced families might be more effective at fighting for these dollars for their children than black or Hispanic families.

Morgan argues that current federal rules on disproportionality make it hard for school districts to grant disability status to substantially more black students than white students and that’s denying treatment to black students who have clinical needs. Meanwhile UCLA’S Losen contends that this is not a reason to relax the disproportionality rules. He says that individual schools that are over-identifying students of color for disabilities, such as the white-dominated schools in the birth records study, still need to be monitored and reformed.

This story about disproportionality in special education was written by Jill Barshay and produced by The Hechinger Report, a nonprofit, independent news organization focused on inequality and innovation in education. Sign up for the Hechinger newsletter.

The Hechinger Report provides in-depth, fact-based, unbiased reporting on education that is free to all readers. But that doesn’t mean it’s free to produce. Our work keeps educators and the public informed about pressing issues at schools and on campuses throughout the country. We tell the whole story, even when the details are inconvenient. Help us keep doing that.