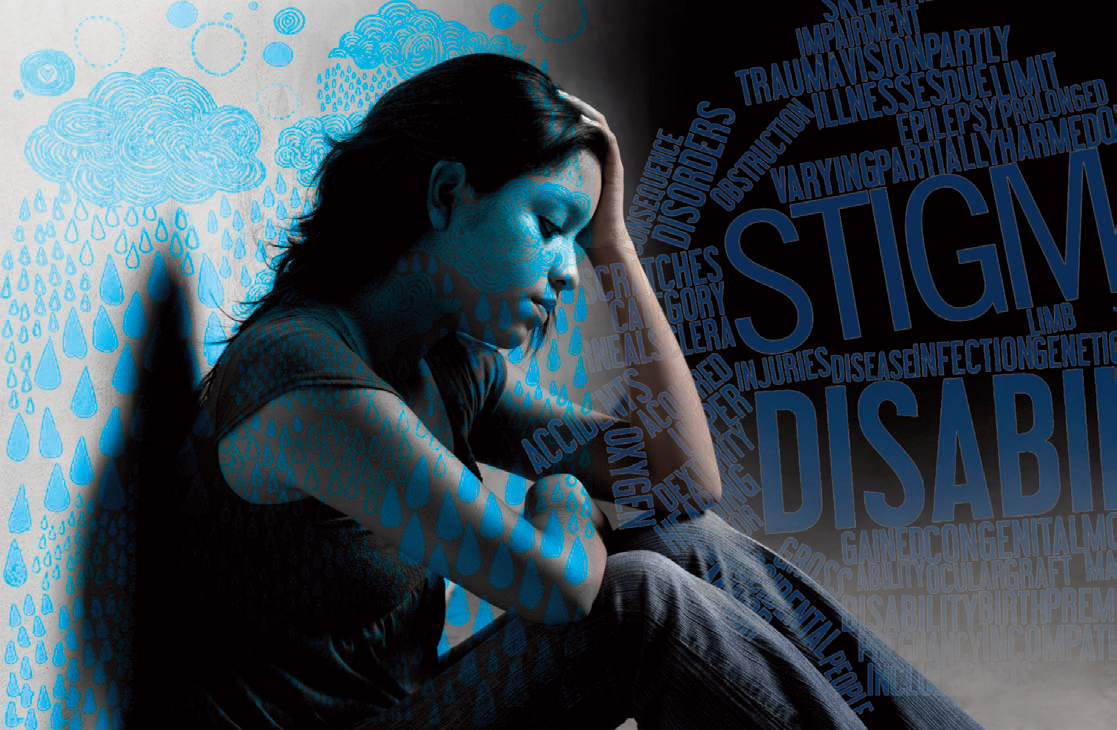 BY CHERYLE B. GARTLEY WITH MARY RADTKE KLEIN

Part One Of A Series

(Authors’ Note: While some of this article has been written in the first person as a matter of style, and due to the fact that one of the authors lives in the world of the stigmatized, it is really a joint enterprise.)

Whether a person is born with a health condition, or living with one acquired at any age, stigma in any of its various forms very often accompanies health challenges and disabilities, usually when they have a publicly recognizable aspect. And for many, the stigma can be more difficult to cope with than the disability or health condition itself.

Stigma, as attached to differences of the human body, is described in the 1963 classic book by sociologist Erving Goffman, Stigma: Notes on the Management of Spoiled Identity. In it Goffman states: “The term stigma, then will be used to refer to an attribute that is deeply discrediting…” “Spoiled Identity” encompasses in two words an expanded definition put forth in another academic book The Social Psychology of Stigma where stigma is defined as “(1) the recognition of difference based on some distinguishing characteristic, or “mark”; and (2) a consequent devaluation of the person.”

No matter which of the many definitions of stigma selected, we all recognize immediately when stigma is directed at us, our child, or someone we care deeply about. There are many ways to stigmatize. All too common among them are the verbal messages, such as: a perfect stranger inquiring “what is wrong with your eye (or hand, or leg, or foot)”; descriptions by the media such as “confined to a wheelchair” (versus “uses a wheelchair for mobility”); adjectives such as “blind man” (versus “a man who is blind”); and deafening words such as “crippled” and “retarded.” Verbal messages of stigma are so common that many of them have become entrenched in the public’s vocabulary and are no longer even noticed, except by the recipient, or those of us sensitized to the damaging effects of stigma. They can also be so very subtle. For example, take Diane Sawyer’s reporting on President Obama’s first inauguration. Having hurt his back packing, the outgoing Vice President was using a wheelchair. To millions, Sawyer expressed the opinion that being such a proud man, the Vice President wasn’t happy to be seen in this manner. The stigmatizing nature of her observation was probably unintended, yet a clear and negative message was delivered.

Non-verbal messages are also included in the stigma armamentarium. Most potent of all may be staring and double takes. Without a word being said, these actions can impact the quality of life of the recipient. So harsh is the impact for some that they are unwilling to enter into society, because they have found there is no such thing as an uneventful trip to the grocery store or running other errands – trips that most take for granted can be accomplished in peace and anonymity. Those who have a visible health condition are never safe from “stranger danger” (staring, questions, pointing) as they go about the normal activities of daily living.

What can be done to unlock the prison of fear, the tendency to prefer isolation to careless ridicule? We believe in a two-pronged and simultaneous attack on stigma. The first approach is designed to change the atmosphere in society, to shine a light on reactions, and improve the “cultural competence” of unaffected people. In this case, cultural competence would include teaching the unaffected about “our” differences so that the general public can interact  with more skill and competence when faced with a disability or health condition they know nothing about. The  second approach is increasing the capabilities and resilience of those who are stigmatized because of visible  differences, in anatomy, behavior or adaptive equipment.

Due to the ongoing efforts of many, including non-profits, in the health arena, celebrity spokespersons, and  executives in industry (whose products are purchased by consumers with stigmatizing health conditions), our society is increasingly being exposed to the concept and appearance of differences. Michael J. Fox made the full symptoms of his disease obvious when he appeared before the US Congress without taking his Parkinson’s medication; Dove’s beautiful campaign featured insightful commentary on the perception of beauty; Depend’s Underwareness Challenge is tackling taboos with inclusion and humor; and Chicago’s Access Living’s sponsorship of a Disability Pride Parade, are all examples of the growing efforts to celebrate differences and defeat the stigma that surrounds changes in the human body. Rick Rader, MD, this publication’s Editor in Chief states: “The last word in difference should be – what difference can I make?”

There have already been some changes in attitudes about difference over the years. But what is the cart and what is the horse? Do individuals wearing artificial limbs and shorts in the heat of summer do so because they are personally comfortable not covering up in long pants? Or do they do so because society has “accepted” artificial limbs as a fairly common way to achieve mobility? Whatever the answer, these changes happen at a snail’s pace as indicated by the fact that for decades the word “cancer” was seldom spoken. Those with cancer stayed mum for fear of being both stigmatized and ostracized – a situation which still exists in many developing countries today. It was not that long ago in the 1980’s that Jory Graham, fighting cancer herself, began her syndicated Chicago Tribune column, “A Time to Live.” She related an example of the stigma surrounding cancer, describing an upscale private dinner party in a Gold Coast mansion where the dinner table gleamed with china and crystal, except for a single place setting of paper plates for the person with cancer. Today, America has walks in communities from coast to coast in order to fund cancer research, and it is common to see television advertising promoting cancer treatments and treatment centers.

But are we really seeing a generalized change just because the word cancer is now spoken out loud, and individuals no longer cover prosthetics with long pants? Has society changed, or is stigma simply been actively diminished in very particular instances, while continuing to raise its head in hundreds of other common circumstances? When looking closely, it seems it just might be the latter, as indicated by some of the interesting results of a recent Simon Foundation for Continence Survey. (see sidebar.) It seems that there is a need to address not just the stigma associated with one condition at a time, but rather a broad attack on the behavior of stigmatizing in general. We need to launch an effort to build the kind of cultural competence that motivates all individuals to replace stigmatizing behavior with an effort to see and respect each individual. More on that later.

Since over the ages, society has persisted in greeting their fellow humans with stigma, we may not be able to change social attitudes quickly enough to protect ourselves or the next generation from the effects of being stigmatized. That likely being the case, fair or not, one way forward to stop this damage is to build in ourselves, those affected and those who care about them, resilience to spare.

Tania Luna and Lee Ann Renniger, two of a smattering of researchers in the world who study the psychology of  surprise, have much to offer about how to increase resilience in their new book Surprise: Embrace the Unpredictable and Engineer the Unexpected (2015). How does this relate to stigma? It relates because no matter how much we come to expect it, stigmatizing behavior can still be a surprise. Not that those of us with a stigmatized health condition are in denial, but rather it’s that whenever we walk out our door we never know when or how stigma will confront us. Often, stranger danger pops up just when we let our guard down and are beginning to enjoy a simple outing like a trip to the park or running an errand.

Luna and Renniger contend in their chapter on resilience that “we have to be confident in our ability to handle the surprises that come our way, recover, and use them to our advantage.” When stigma “surprises” us, anger, sadness, the desire to remain out of the public’s eye, among various other reactions, are certainly appropriate.

The key  question to ask ourselves is how much of life do we want to miss in order to avoid being stared at, questioned, and in other ways stigmatized? If the answer is as little as possible, then building resilience is one way forward. •

ABOUT THE AUTHORS:
Cheryle B. Gartley is Founder and President of The Simon Foundation for Continence; co-author and editor of the first book for the layperson on incontinence, “Managing Incontinence: A Guide to Living with Loss of Bladder Control,” published in English, Spanish, and Japanese. She has published widely, including articles in journals such as The Lancet, Urologic Nursing, Exceptional Parent, and Social Work Today. She is the co-founder of the International Continence Society’s Continence Promotion Committee; Simon Canada (now the Canadian Continence Foundation); and the American Restroom Association. She also sits on several governing and advisory boards.

Mary Radtke Klein has been a long-term care consultant and trainer with nearly 30 years of experience in advocacy, consumer education, assisted living development and staff training. She worked closely with State regulators and providers to identify best practice procedures that work in the real world and to promote improved quality of life for residents in a variety of long term care settings. She is a popular presenter at workshops and conferences, and continues to write and serve on industry advisory groups and the boards of not-for-profit organizations.