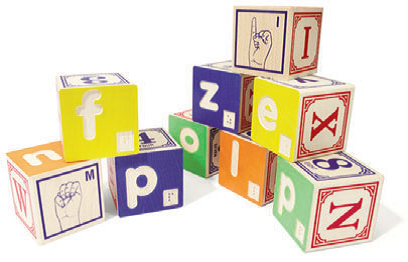 Even though American Sign Language (ASL) and English are totally diverse languages in that one, ASL, is a visual language and English, in its spoken form, is an auditory language, their manner of acquisition is strikingly similar, in that the brain readily encodes both a visual language and an auditory language in like fashion. Certainly, deaf  children are born with a predisposition to learn language, whether it be visual , spoken, or a combination of both—the goal being to provide for the basic human right to communicate deeply and meaningfully with others and to develop age-appropriate language skills.

However, a number of myths have developed regarding the relationship of the two languages. In fact, these  misconceptions are so prevalent among society and professionals that they might be considered folk-myths. Following are some of the myths and the facts for rebuttal:

myth The learning of American Sign Language (ASL) will either prohibit or inhibit the learning of speech.
fact The learning of American Sign Language can assist deaf children in learning to speak, as well as to write in English. Research has shown that fluency in ASL positively influences speech development and the development of English literacy in deaf students. With or without assistive listening devices, the deaf child is primarily a visual learner. Therefore, it is logical and pedagogically sound to play to the child’s strength, vision, and not to his/her weakness, hearing.

myth Learning both American Sign Language and spoken English will confuse the child.
fact Studies have shown that learning American Sign Language will actually help the deaf child learn spoken English and develop literacy in written English. Research conducted in the Visual Language Laboratory at Gallaudet  University indicates that deaf children whose first language is ASL achieve higher levels of English competency, due to the carry-over effect of a visually accessible language.

myth Deaf children should learn to speak first, because speech is an indicator of academic success. They can learn ASL later when they are adults.
fact A bilingual approach utilizing both American Sign Language (visual language) and English (spoken language) prevents language deprivation. Research indicates that deaf children who are immersed in both ASL and English achieve language milestones on time and on track with language and literacy development. Contrary to popular belief, a bilingual approach (both ASL and English) does not impede successful language learning; in fact, it has the opposite effect. Studies show that early exposure to multiple languages ensures optimal linguistic and cognitive development. Limiting or prohibiting exposure to one language with the aim for improving the acquisition of another is unwarranted, as both languages will support the other’s language development.

myth The deaf child will be socially deprived if they learn American Sign Language.
fact American Sign Language fosters optimized social interactions for deaf children because there is no language confusion or delay associated with its use. The establishment of accessible and complete early communication with parents, siblings, and extended family members is vital to developing cognitive abilities, the acquisition of world knowledge, communicating fully with the surrounding world, and one’s personal identity. It is through an accessible and complete language that children develop social, emotional, and cognitive abilities that are critical to timely development in all areas.

myth American Sign Language is not actually a real language.
fact American Sign Language is a natural language with its own grammar, idioms, and figurative allusions that are independent of English. ASL, like all languages, has naturally developed over time among a community of users and is acquired through an ordinary course of language acquisition by children exposed to it. ASL is grammatically organized according to principles found in all other human languages, but exhibits independent patterns of  organization based on vision. In fact, ASL is the third most popular language offered on university campuses throughout the United States.

myth American Sign Language should not be used in the educational environment as it will detract from the learning of academic subjects and will impede the development of literacy in English.
fact The use of American Sign Language in the educational setting embodies the use to two languages, ASL and English, as well as two cultures, the hearing culture and the Deaf culture. Goals include: 1) using a visual language to increase knowledge of content information; 2) developing transfer strategies from ASL to English in order to enhance information gain; and, 3) developing a strong metalinguistic awareness of English and how it is used in different settings. Literacy in English can be achieved by first providing the child opportunities to acquire a visual language (ASL), and then bridging from this language to the written form of English.•

ABOUT THE AUTHOR:
J. Freeman King is affiliated with Utah State University.