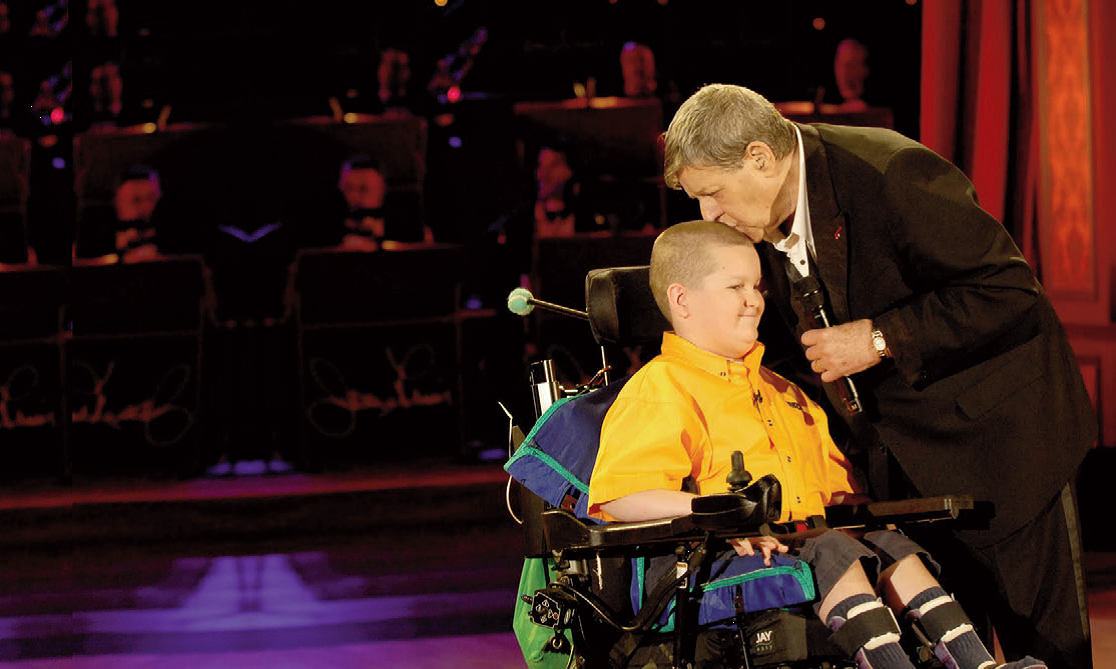 “Look at us, we’re walking!
Look at us, we’re talking!
We who’ve never walked or talked before…”
“Look at us, we’re laughing.
We’re happy and we’re laughing.
Thank you from our hearts, forever more.”
“There are so many other children,
Who only speak with a silent prayer.
For those who haven’t been so lucky,
We hope and pray you will always care.”
“Someday they’ll be walking.
Someday they’ll be talking,
Imagine walking to the candy store.
But the fight has just begun.
Get behind us everyone,
Your dollars make our dreams come true.
Thanks to you.”

Yikes! Anyone who grew up in the 60’s and had a television set can easily recall that earworm of lyrics from the song “Look at us, We’re Walking,” the theme song (along with “You’ll Never Walk
Alone”) of the Jerry Lewis Annual Labor Day Muscular Dystrophy Association (MDA) telethon.

The MDA Telethon was more than a fundraiser, it was a family affair and, like the March of Dimes before it, changed the landscape for raising money for disabilities.

Running from 1956 until Lewis was unceremoniously dismissed as National Chairman of the MDA in 2010, the show went from a 24 hour marathon to a two hour show its last two years and was completely dropped in 2015. The MDA officially announced that, “The new realities of television viewing and philanthropic giving” make it the right time to pull the plug.

And they are probably right especially in light of the landmark “ALS Ice Bucket Challenge.”

The 2014 MDA telethon (named “Show of Strength”) raised $56.9 million dollars while the ALS Ice Bucket Challenge raised $100 million dollars in one month. This viral phenomenon drew everyone, from average citizens, to celebrities nominating each other to donate to the cause (Lou Gehrig’s Disease) or pour a bucket of ice over their heads. The fundraising community knew that the flag had been placed in new terrain. The digital telethon was not only intensified but it didn’t require a
parade of patients with amyotrophic lateral sclerosis.

It was the parading of children with muscular dystrophy that raised eyebrows, even as the amount of
money being raised increased, year after year. Jon Wiener (from the blog “The Notion”) remarked,
“Every year it was the same. Jerry did his telethon shtick, parading little kids in wheelchairs across the Las Vegas stage, making maudlin appeals for cash, alternatively mugging and weeping, and generally claiming to be a friend to the doomed.”

Okay, okay enough high falutin biomedical references to make a point. The point is that Lewis’ patronizing, disrespectful and manipulative use of children with muscular dystrophy resulted in some heavy duty research. Of course the age old question of, “Do the “means justify the ends?” come into play.

Laura Hershey, one of the activists who organized annual protests outside the telethon, remarked that the pitch was always for “Jerry’s kids.” But “two thirds of the clients of the Muscular Dystrophy
Association were adults, and they didn’t like being referred to as “Jerry’s kids.”

In 1973, Jerry held up a child with muscular dystrophy and announced, “God goofed, and it’s up to us to correct His mistakes.” In the first Labor Day Jerry Lewis Telethon without the comedian, the
Muscular Dystrophy Association lost 14 million dollars in its fundraising efforts. That’s a lot of test tubes and beakers, not to mention legions of researchers who had to halt their efforts.

In the conclusion of the research article, “Advances in Duchenne Muscular Dystrophy Gene Therapy” (van Deutekom et al, Nature Genetics Review) the authors remark, “Steady progress in understanding the MD Gene and its function has pointed to several innovative therapeutic strategies. It now seems reasonable to expect that the next decade will see great advances in this field. Considering its efficiency and relative simplicity, the antisense approach seems the next candidate for clinical trials.” Promising clinical trials made possible by basic research, funded in part by a
comedian that might have missed the boat, but did his best to insure there was room on the ship for his “kids.”•